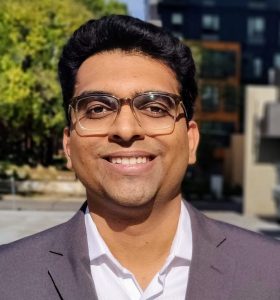 Ashwin’s journey in pharmacometrics started when he was introduced to the field during his PharmD by Dr. Surulivel Rajan at Manipal University in India. His interest was piqued when he saw how equations could help estimate patient pharmacokinetics and optimize individual doses. Ashwin then pursued a quantitative clinical pharmacology fellowship at the Clinical Pharmacology and Phase 1 trials unit at the Advanced Centre for Treatment, Research and Education in Cancer (ACTREC), Tata Memorial Centre, one of India’s premier cancer research institutes. Under Dr. Vikram Gota’s guidance he worked on using quantitative methods to optimize therapy in oncology patients on both small and large molecules. One of the key studies that he worked on at ACTREC was to study the pharmacokinetics of a rituximab biosimilar in which they identified that the pharmacokinetics of the biosimilar was comparable to the innovator compound. This was a key step as this in conjunction with prior evidence of safety and efficacy of the biosimilar gave oncologists in India confidence to prescribe the biosimilar which was one tenth of the innovator’s cost – leading to cost savings in a patient populations burdened with massive treatment costs.

His experiences at the fellowship motivated Ashwin to pursue a career in pharmacometrics and he decided to move to the University of Minnesota for a PhD under Dr. Angela Birnbaum’s mentorship. His PhD thesis is on using quantitative clinical pharmacology approaches to understand PK/PD changes of antiseizure drugs occurring in special populations of pregnancy, postpartum and breastfeeding. Several pharmacokinetic changes occur in these populations and thus it is important to balance therapy in mother while minimizing drug exposure to the infant both during in-utero and breastfeeding. But due to logical and ethical considerations in these populations, traditional study designs and analyses can be difficult. His thesis aims to overcome this challenge by using a variety of model-based methods.